I became very familiar with the investment casting process when I
worked at Sturm-Ruger. To describe all the facets of it would fill a
book, but I can give you a brief description. The parts to be cast
start as an injection moulded wax model of the part, which is done with
great precision, with the dimensioning of the die calculated to control
the shrink rate of the wax and the size mould it will make when the wax
is burned out and the silica shell surrounding it is fired. The wax
pieces are gated together in assemblies of maybe several hundred small
parts, or about 12-15 rifle receivers or revolver framed, sometimes
combining smaller parts in the assembly which is called a "tree",
because it looks somewhat like a tree when finished. This assembly is
first dipped in a thin slurry of silica dust and water, then
alternately coated with progressively larger sizes of silica and more
slurry until a heavy shell is built up around it which will stand
normal handling in the foundry. Groups of the trees are cured until
dry, and after a correct period of time they are fired in a kiln which
burns out the wax form, hence the name "lost wax" used to describe the
process. The fired shells are stored until needed, and prior to casting
are heated red hot in a gas furnace, while the steel alloy is melted in
an electric induction furnace. Stainless steel parts are often cast
with vacuum melted steel in a controlled atmosphere such as nitrogen or
argon to control oxidation. Common alloy steels such as 4140 chrome
moly are cast in normal ambient atmosphere, but the open mould sinks
are covered immediately with a de-oxidant compound. After casting the
silica shell is broken off and the individual parts cut away from the
connecting gates. The parts are then cleaned, usually by sandblasting,
then visually inspected, and criticial parts such as rifle bolts,
revolver frames and rifle receivers are inspected by x-ray and/or
ultrasonically, before being annealed, straightened, and lotted up in
groups to be sent to the machine shop. In my experience I feel that
investment casting as done at Ruger is far superior to forging because
it reduces the stock removal necessary to make the finished part, and
permits use of alloys which cannot be machined by common stock removal
methods. Consequently, Ruger can use materials of a very low sulphur or
selenium content with a high hardenability which provides greater
tensile and compressive strength than the lower alloys other
manufacturers much use because their manufacturing processes require
use of additives like sulphur or selenium to obtain acceptable
machinability. I feel that resulphurized steels should not be used in
thin sections or in applications where extensive machining is required,
because of their greater notch sensitivity. We routinely subjected
Ruger rifles and revolvers to testing which destroyed competitor's
products. Good forgings of quality material can be very strong, but
are very expensive to produce into complex parts. Investment casting
permits economical manufacture of large production runs of like parts
which offer strength equal to any other manufacturing method, if the
correct alloys and methods are used. Stamped sheet metal parts are not
the same as forged, because the working is done cold rather than hot,
and the grain structure of the steel is not changed. Stampings are
seldom used for highly stressed parts, although they can be used as a
receptacle to hold assemblies of high strength parts together, as in
the HK roller-locked weapons.
http://yarchive.net/gun/investment_casting.html
------------
Просто и доступно.
К тому же немного приоткрывает завесу над использованием автоматных сталей (с добавками серы или селена) в оружейной индустрии США. 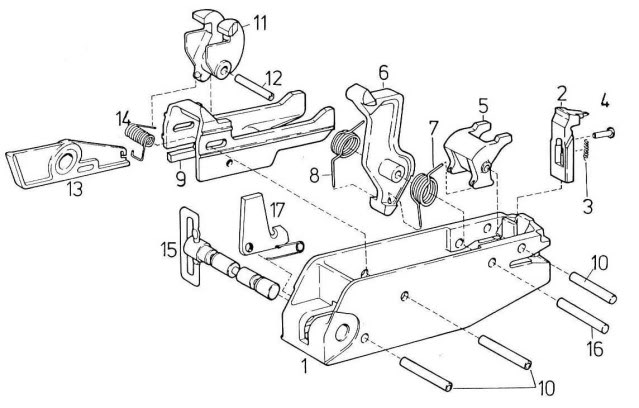